Not what you were looking for?

OpenGen is a proprietary sending technology developed by Robly. Tens of thousands of SMB’s have seen open rates, click-through rates, and consequently ROI rise upwards of 50% from pre-OpenGen levels.

Robly’s breakthrough invention of OpenGen in 2014 flipped the Email Marketing space on its head and put Robly on the map. We guarantee OpenGen will generate 50% more opens within 3 months, and if it doesn’t, we will refund your entire subscription, no questions asked. Want to know more? Email support[at]robly.com to book a demo and we’ll show you how it all works.

Why is OpenGen So Effective?

Robly has pored over millions of emails sent through our system and noticed two interesting trends.

The interesting thing about campaign-to-campaign open churn is that no matter what our users sent, or when they sent it, the open churn was consistent.

What did we take away from that? In terms of opens, your subject line is less important than you think. Your subject line may win you another percent or two of opens, but more than half of opens seem to be dictated by the collective erratic inbox behavior of your subscriber list, which, according to our data, distill to a shockingly consistent pattern.

OpenGen maximizes engagement by capitalizing on the 55% of your subscribers who just happened to miss the first go-around of the campaign, but are otherwise engaged.

OpenGen is not recommended for frequent senders. We do not permit senders who send more than twice a week to send via OpenGen. We only recommend OpenGen for users who send campaigns bi-weekly or less.

Many marketers have been perplexed by recent changes in some of the world’s most popular SPAM filters, notably Gmail. The heart of the change is a shift toward engagement. SPAM filters are much more likely to snag email that subscribers are NOT interacting with. Email that subscribers ARE interacting with—by opening, clicking, etc—is much more likely to reach an inbox.

As a result, for many senders—notably large senders—there’s been a dramatic drop in opens, clicks, and ultimately ROI, with Gmail at the center of it all, and other ESPs following close behind.

It’s not just about list building practices and content anymore. In today’s world of email marketing, if 93% of your emails aren’t getting opened or clicked on, that is a very bad thing.

Your emails are going to land in the SPAM folder, increasingly so with each campaign, until there won’t be much ROI left in your email marketing.

For this typical 7% average open rate case with around 50,000 subscribers, only 33% of this marketer’s subscribers open the campaign in any given month, and around 40% have never opened at all.

That’s the kind of email SPAM filters will steal away from an inbox.

Enter Robly’s RoblyEngage. After six months of sending, Robly customers can opt to turn on RoblyEngage. This will systematically eliminate completely unengaged users, which in turn proves STELLAR engagement to SPAM filters and earns a spot squarely in the inbox, not the SPAM folder.

Relectric Supply Company is based in San Jose, California and buys and sells high quality current model and obsolete electrical distribution. Relectric features an online store where users can find images, datasheets, and pricing for more than 200,000 part numbers.

According to Jeff Guyman, Relectric’s Head of Sales and Marketing, Relectric’s first campaign using OpenGen yielded an incremental $22,500 of net profit to the company.

“The math is fairly straightforward,” says Guyman. “We have around 56,000 customers on our mailing list, and with each send, we generally get a response rate of 1 in 1,000. Each of those RFP’s averages around $750 for us.”

“We sent a campaign with OpenGen last week and saw an additional 60% increase in opens, from a universe of people who would not have opened the campaign otherwise.”

“RFP’s were also up 60%, up linearly with the additional opens, and we cleared an additional $25,200 profit on the campaign. Needless to say, I was blown away by a tool that makes me $25k in two clicks and a change of subject line, and we will continue to use it going forward.”

Email marketing is a very important part of Relectric Supply’s overall marketing strategy. Relectric has a large list of current customers, and is highly promotional in the way it uses email marketing. Campaigns consist mainly of a “Free iPad with a $5,000 or more order,” or “Free TV with an order above $3,000.”

Relectric sends approximately one campaign every two weeks, and tries to keep the promotions fresh, interesting, and relevant. Here is an example of a promotion Relectric ran in February: 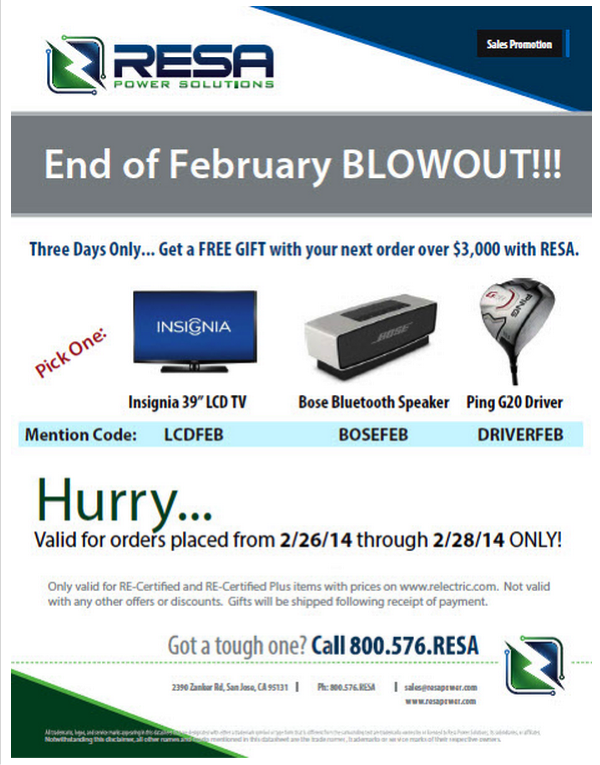 Need help putting together a campaign that will get you stunning results through OpenGen? Email us at support[at]robly.com. We’re standing by and eager to help your business grow.